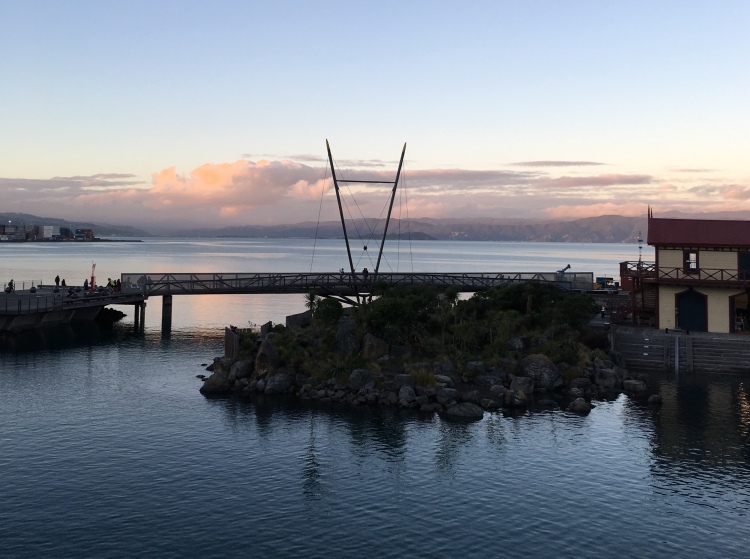 Recently, a couple participating in an Australian television quiz show lost the chance to win more than R5m when they failed to identify New Zealand’s capital from four Kiwi cities listed.

Although one might be tempted to snigger at their stupidity, to be fair Wellington does rather sail under the radar – the Antipodean equivalent of Switzerland’s Bern.

Everyone knows about Auckland because it’s New Zealand’s only proper-sized metropolis. Christchurch garners headlines for its devastating earthquakes and Queenstown draws thrill seekers to its near-vertiginous slopes. But Wellington? You might find yourself drawing a blank — wondering what, aside from being a seat of government, it has to offer. It turns out quite a lot, as I discovered over the course of a long weekend.

First, it’s very pretty. Sandwiched between ocean and lush hillside, the city has bent to nature’s will, rather like Cape Town has, while its wooden houses are reminiscent of a diminutive San Francisco. It’s no wonder the tourism slogan, “You can’t beat Wellington on a good day”, has entered the local vernacular – everyone here says it, though they won’t necessarily tell you how many of those in a year there actually are.

Wellington’s cable car (going since 1902) is possibly the most anticlimactic attraction, ascending what feels to be about 2m up a slope. It does, however, deliver you to the pick-up point for the free shuttle bus to Zealandia. Ringed by a possum-proof fence, this is a remarkable Jurassic Park-like attempt to restore 225ha to what it was like before humans began arriving here 800-odd years ago.

Settlers from the Pacific and then Europe brought with them plants, animals and parasites that have wreaked havoc on New Zealand’s fragile ecosystem. Since breaking away from the Gondwana super-continent 80-million years ago, an astonishingly unique biodiversity has evolved here, including a number of flightless bird species.

As you wander through Zealandia’s dense forest, you’ll encounter one of these: the opalescent South Island takahe, which until its rediscovery in 1948 was thought to be extinct.

Back down by the harbour’s edge, Te Papa Tongarewa, the country’s national museum, is fantastic – and free. Absorbing for adults and children, the country’s natural and social history is beautifully distilled into a sequence of engaging, interactive displays.

An entire floor showcasing the national art collection will launch in 2018. In the meantime, City Gallery Wellington (which predominantly shows temporary work by local artists) is a short walk away, as is the New Zealand Portrait Gallery.

And that’s one of the great things about the city: its central business district is compact and walkable. Bar hopping and café crawling is dead easy. Admittedly, if you’re travelling on the South African rand, getting a taste of the city’s culinary scene can be stomach-clenchingly expensive. Expect to pay about NZ$12 (almost R120) for a pint of beer; main meals typically vary between NZ$17 and NZ$26 in a lot of restaurants; starters hover at about NZ$10. It’s roughly NZ$4 for a flat white. The good news, though, is that whatever you order is most likely going to be very good.

While style trumps substance in so many other parts of the world, the good citizens of Wellington prize authenticity above all else. The golden thread running through this city’s eateries and quaffing spots is a passion for really good tasting food and drink made with really good ingredients. Everything else comes second.

Determined to tick off a few watering holes listed on Craft Beer Capital’s online map, I headed first to the Little Beer Quarter, a homely pub with lights in bottles hanging over the bar. From its wide range of craft beers, I picked the bold and beautiful Royal Tanninbomb, an imperial-strength Indian pale ale (IPA) brewed in Wellington by the Yeastie Boys.

Next up was Golding’s Free Dive bar, a riot of bright colour, with light bulbs of every hue. The interior might be playful, but it’s serious about great beer, with a great selection of local and US craft. I tried the Citra, another imperial-strength IPA from Auckland’s Liberty Brewing that was big in every way — hoppy and bitter.

Across the courtyard the bar’s founder, Sean Golding, has teamed up with Shepherd Elliott of the nearby Leeds Street Bakery and Ti Kouka Cafe, launching Shepherd, one of the most hyped restaurants in the city.

However, we opted for Pomodoro Pizza instead — made right next door and which you can order from the bar at Goldings. Owner Massimo Tolve imports his mozzarella from Naples and is a member of the prestigious Associazione Verace Pizza Napoletana.

We had the four-mushroom pizza with truffle oil: chewy and light dough topped with creamy mushroom goodness. The slices disappeared within seconds.

Afterwards, we braved the Saturday night crowds of Courtenay Place — the city’s drinking and partying strip — veering down a side street to Black Dog Brewery where you can sample beers. While most patrons were focused on the Lions getting thrashed by the All Blacks in Auckland, I had eyes only for the deliciously bitter IPA in front of me.

Feeling a bit beered out, I had a gin martini at Vinyl on Courtenay Place – a long and narrow bar with records stacked on the shelves. I was feeling peckish again, so we wandered through the Wellington Night Market, a pedestrianised street full of food stands including Cambodian, Chinese and Greek. It is open every Friday and Saturday evening. In the end, I opted for a delicious butter chicken roti and a warming cup of chai.

We weighed up getting a night cap. The songstress accompanying the jazz band at The Lido bar spotted us dithering on the pavement outside and motioned for us to come in. We were tempted but headed to the hotel instead.

The next night, I visited the Garage Project in the Aro Valley – a cool, cute neighbourhood with pretty wooden houses that is a short walk from the city centre. The Garage’s brewery adjoins an old petrol station forecourt and you can taste brews here, though it’s better to head a few doors down to its narrow, cosy taproom.

Decked out in bunting and other tat, it was celebrating the launch of its Silk Road-inspired beers, one of the many limited-edition ranges it has produced. On the way back, we passed the Bresolin, an elegant wine bar with ceiling-high windows. We were tempted to go in but went to the slightly scruffy Capital Market instead, where we ate Mexican-Korean tacos: bulgogi beef and prawn tempura.

If you’re not a beer person, then head to the eminently civilised Hawthorn Lounge. Our Peruvian barman was an alchemist, concocting a superlative chocolate negroni for me.

Happily, if you’re a little worse for wear the next day (like I was), Wellington’s daytime dining scene has got you covered. The appropriately named Fidel’s on the café-lined Cuba Street is justifiably crammed on weekends. Order its amazing, feisty spiced Bloody Mary, which comes topped with crispy bacon-wrapped celery. I followed this up with an excellent flat white and a bacon and egg butty with melted cheese on a super-fresh, crispy ciabatta.

At Leeds Street Bakery, you can watch the young bakers at work prepping batches of sourdough while you sip on Red Rabbit coffee. I tried the famous salted caramel cookie – crumbly with chewy caramel and flecks of salt: perfect, basically. Another great breakfast option is Hangar, the home of Flight Supreme coffee. I had the rich and creamy braised duck Benedict on English muffins with peppercorn hollandaise. While there’s a host of roasts to choose from, start off with a pillowy latte made with the smooth house Bomber blend, which has hints of burnt sugar and chocolate.

Customs by Supreme offers yet more fantastic coffee in a mid-century-accented space populated by stacks of Monocle and cool kids in beanies, skinny jeans and their grandad’s jumpers. Next door, Precinct 35 stocks exquisite design objects including Welfe jewellery handcrafted in Melbourne, Postalco stationery from Japan and Sphaera soap bars (including one containing coconut milk, jojoba and bamboo charcoal) made in Wellington.

The tourism people had it wrong. If nature on tap and unpretentious, delicious food and drink is your thing, Wellington is hard to beat – come rain, wind or shine.

This article first appeared in the 16 November 2017 edition of Business Day under the headline “Ale and arty in New Zealand’s overlooked and culinary capital”.