As we surge into the hot sky off the Satara airstrip after a short visit to the Singita concession in the Kruger National Park, I feel a wrenching as the dusty earth and trees shrink and the little plane’s nose turns towards Johannesburg.

The concession is home to two Singita lodges, Sweni and Lebombo, a short walk apart and both recently refurbished.

Sweni, the smaller one, is slung out along the N’wanetsi river. Its seven suites are poised lightly on the earth, literally and figuratively. The prefabricated structures could be removed overnight if needs be.

I skip a game drive or two to make the most of my digs. Soaring windows frame views of bush and river, letting light and birdsong flood inside. The interiors are imbued with an earthy African modernism that hints at Pancho Guedes’s mid-century Mozambican masterpieces.

Minimalist furniture and geometric accents are combined with a lush array of contrasting textures: wood and clay, fabric and metal. Rounding it off are gem-inspired pops of colour, timeworn artefacts and plants. The effect is warm and embracing — exquisitely stylish without being intimidating.

After a leisurely outdoor shower, I meditate, eyes closed, on my deck’s daybed. Two hippos grunt and snort in the river right below. An emerald-spotted wood dove warbles above; a chorus of insects rise into song as the day warms.

In the early afternoon a massive kudu saunters past. On the top of the honey-coloured boulders on the ridge opposite, a fish eagle perches on a fig branch.

Keeping the sliding doors open is discouraged to prevent vervet monkeys from raiding the well-stocked mini bar. But after requesting a sleep-out, my daybed was transformed into a bed, replete with mozzie net, crisp bedding and soft pillows.

The night sounds stitch together in a rich aural tapestry of water splashing, insects buzzing, hippos grunting, hyenas howling. I wake as the birds start their chirruping at dawn.

With acacia-studded plains ruffling up to the gentle curves of the Lebombo mountains, the extraordinary, diverse landscapes of Singita’s roughly 133km² concession demand exploration. Over 72 hours, I traverse it in game-drive vehicles, by mountain bike and on foot. 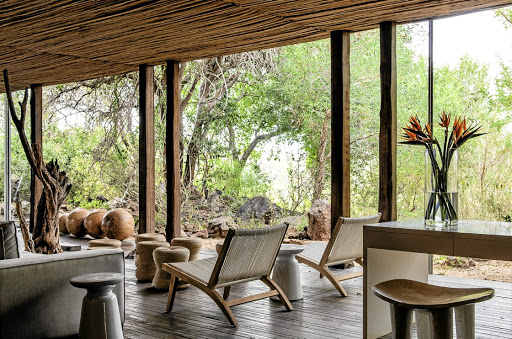 Field guide JP le Roux’s encyclopaedic knowledge of the surroundings bring them more vividly to life. Every track, dropping and leaf tells a story. The go-away bird has two different calls: one warns of aerial predators, the other of ground ones.

Muddy smears on a majestic leadwood beside a waterhole, Le Roux explains, are from elephants trying to remove parasites from their skin. The grey colouration we see on a male lion’s hind legs, he tells us, is due to a chemical change that occurs when they obtain territory.

We encounter plenty of big game: lion, elephant, wildebeest, buffalo and a white rhino. But it’s the smaller sights and sounds that I relish most: the plaintive wails of a Bateleur chick, a terrapin plopping into water, the rustle of banded mongooses over rock, a Sharpe’s grysbok scampering to safety.

On the ridges close to Sweni, the smooth, spherical boulders balance precariously on top of each other like avant garde artworks. Interrupting the dry, ashen slopes are shocking splashes of bright green: pod mahoganies, the first trees of the season to flush their leaves.

Singita serves up dishes that are as spectacular as the wildlife and landscapes. They enlisted the services of Cape Town-based gastronomic superstar Liam Tomlin. With executive chef Andrew Nicholson he’s overhauled the kitchens and menus of Sweni and Lebombo; and culinary staff from both also get a chance to work in Tomlin’s Chefs Warehouse restaurants in Cape Town.

At Sweni the tightly edited lunch menu is split into categories based on cooking type, such as “wood-fired”, “pan-fried” and “sautéed”.

At Lebombo Lodge, which I move into after two nights at Sweni, the midday menu is tapas focused — petite, saliva-inducing treats like creamy duck curry and mayo slaw or thickly diced springbok tartare with salty, crunchy capers.

Both lodges have wondrous breakfasts and an exceptional selection of wine. Singita owns a dedicated maturation facility in Stellenbosch where wines are stored until they’ve reach optimal drinking age.

With the knowledgeable and charming Delaille Raubenheimer, sommelier to both lodges, we are in excellent hands. Every mealtime (except breakfast, obviously) is an opportunity to learn about new wines and winemakers. Ask her nicely and she’ll unearth a few of her gems for a pre-dinner tasting down in Lebombo’s moodily lit wine studio.

Just over a decade ago Singita opened its Community Culinary School at Lebombo to nurture a high standard of cooking in their kitchens while imparting skills and experience to nearby impoverished communities.

In 2017 one of their graduates, Tsakane Khoza, travelled to Blue Hill at Stone Barns for an internship at the acclaimed farm-to-table restaurant’s kitchens in upstate New York.

For a R650 donation (which goes towards the school), guests can attend cooking classes, learning about experimental techniques and recreating dishes featured on the menus.

After my tapas at Lebombo I retire to my sleekly modern suite, one of 13 along a rocky outcrop. The coolly subdued palette of greys and other neutrals accentuate the staggering vistas beyond the window.

I nap on the daybed, high over the river. By the time I’ve woken, the brassy clouds have faded; the sky is a bolder blue. I watch as the shadows lengthen, greens darken and the setting sun sets the boulders aglow.

This article first appeared in the 11 September 2018 edition of Business Day. I visited Sweni and Lebombo as a guest of Singita.