Though there are signs of progress towards tolerance, life for sexual minority groups in many African states remains legally and socially difficult — and downright dangerous in some regions.

In late 2018, Dar es Salaam’s regional commissioner, Paul Makonda, issued a chilling directive. “Give me their names,” he said of gay residents of Tanzania’s largest city. “My ad hoc team will begin to get their hands on them next Monday.”

The threat to round up members of the city’s LGBTIQ (lesbian, gay, bisexual, transsexual/transgender, intersex and queer/ questioning) community, in a country where same-sex acts between men are punishable by a life sentence, left gay Tanzanians fearing for their lives.

In South Africa — where discrimination based on sexual orientation has been banned since 1996 and same-sex marriage legal since 2006 — it was a disquieting reminder that life for gays and other sexual minorities remains legally and socially far more difficult — and often far more dangerous — in much of the rest of Africa.

There are some signs of progress. Last month, Angola decriminalised homosexual sex, erasing the “vices against nature” provision from its penal code — a hangover from Portuguese colonial rule. The updated law also bans discrimination against people on the basis of sexual orientation; those who do so could face up to two years in prison.

Angola joins other former Portuguese colonies that have removed anti-gay legislation, including Mozambique (2015), São Tomé and Príncipe (2012) and Cape Verde (2004).

In the rest of Southern Africa, however, the situation is decidedly mixed.

In Botswana, where gay sex can draw a seven-year sentence, President Mokgweetsi Masisi acknowledged in December that gay people faced persecution and discrimination in the country. “Just like other citizens, they deserve to have their rights protected,” the Midweek Sun reported him as saying.

Next month, Botswana’s high court will hear arguments challenging the constitutionality of the penal code’s anti-gay provisions, a process that could lead to their being repealed.

In Swaziland, where gay sex remains illegal — though this is typically unenforced — hundreds attended the country’s first LGBTIQ pride march, which went off without police interference in Mbabane in June.

Melusi Simelane, an activist with Rock of Hope, the NGO that organised the march, says: “The situation has absolutely improved from what it was in the past two years. First, it’s been a bit easier to discuss LGBTIQ identities with many people from various backgrounds. This is something that was hard before, because there was this idea that we’re nonexistent and/or are demons. 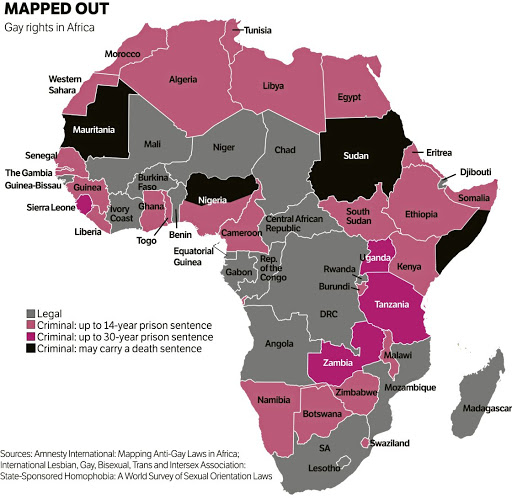 “We’ve come a long way, to try to deconstruct the misconceptions. What needs to happen now are deeper conversations that will lead to the decriminalisation of same-sex relations.”  The region’s only other kingdom, Lesotho, decriminalised gay sex in 2012.

Though Kenya is seen as more progressive than many of its neighbours, harassment of sexual minorities — including intimidation, extortion and murder — remains rife.

Next door, in Tanzania, Makonda’s threats to round up gay people were met by a swift international response. The World Bank suspended its missions in the country, concerned about the safety of its staff. Following a meeting with the bank, President John Magufuli “assured the bank that Tanzania will not pursue any discriminatory actions related to harassment and/or arrest of individuals, based on their sexual orientation”.

But Human Rights Watch’s Neela Ghoshal says these reassurances are hollow, given that “discrimination against [LGBTIQ] people is persistent and pervasive”. This includes, she says, the government’s ban on HIV prevention strategies targeting men who have sex with men, as well as the breaking up of activists’ meetings at which health and human rights are discussed. In Zanzibar, 10 men still face charges for allegedly attending a gay wedding.

In Uganda, a law that included the death sentence as the harshest penalty for gay sex was ruled unconstitutional in 2014. In spite of this victory, gay sex remains a crime, and LGBTIQ activists face ongoing intimidation.

Rainbow Riots, an NGO that wants to open the country’s first centre to provide a safe space for sexual minorities, has been warned by Simon Lokodo, the minister for ethics and integrity, that doing so would break the law.

“In Uganda and Tanzania, where the silent consensus is that the presidents are disguised dictators, attacking ‘errant’ women and homosexuals is an attempt to win over an impoverished populace with the message that it is better to starve and remain unemployed than to anger God,” Patience Akumu, a Uganda-based journalist, has argued in The Guardian.

In West Africa, things are worse. As with Mauritania, some Muslim-dominated northern states of Nigeria under sharia law reportedly impose the death penalty for gay sex. Throughout the whole country, including the more moderate Christian south, public displays of affection between same-sex partners is illegal, as is gay advocacy work.

Despite this, Nigeria has a thriving and increasingly voluble underground gay scene that is finding cultural expression in blogs, short stories and poetry. Romeo Oriogun won the Brunel International African Poetry Prize for writing that the judges described as “deeply passionate, shocking, imaginative, complex and ultimately beautiful explorations of masculinity, sexuality”.

In neighbouring Cameroon, a tabloid published a list of 50 alleged homosexuals in 2006; a new list of another 82 people was reportedly circulating on social media late last year. The country’s virulent homophobia has meant gay people face arrest, assault and even murder.

At the Commonwealth heads of government meeting in London last April, UK Prime Minister Theresa May urged member states to repeal any anti-gay laws remaining on their statute books. According to LGBTIQ news site NewNowNext, about 1-billion people live in former British colonies in which gay sex is illegal — many of them in Africa.

“I am all too aware that these laws were often put in place by my own country,” May said. “They were wrong then and they are wrong now.”

Back in Africa, May’s remarks didn’t go down well. In response, the deputy speaker of Ghana’s parliament, Alban Kingsford Sumana Bagbin, declared that “homosexuality is worse than the atomic bomb … there is no way we will accept it”.

One Nigerian columnist suggested that May’s advocacy was a result of her being lesbian (she is not), while the editorial of the Lagos-based Vanguard opined: “If she respects our cultures and traditions, she and her government would not be trying to impose a culture of homosexuality on us.”

It’s a view — often repeated by politicians across Africa who declare homosexuality as “un-African” — that neglects the wealth of historical evidence suggesting that, far from being an import, homosexuality has been present (and largely accepted) on the continent for millennia.

North African countries have shown the most resistance to reform: gay sex is illegal in every single country in the region, and persecution is rampant.

Egypt is also extreme. Following a September 2017 performance by Mashrou’ Leila, a Lebanese band with an openly gay frontman, more than 60 concertgoers were arrested, according to Foreign Policy — some for simply waving a gay rainbow flag, others for suspected gay behaviour.

Though gay sex is not specifically mentioned in Egyptian law, the authorities use a 1961 ban on “debauchery” and “incitement to debauchery” to arrest and intimidate gay people, even tracking them down through social networking and dating apps. Last month, the crackdown became even more surreal, with Egyptian TV anchor Mohamed al-Gheiti sentenced to a year in prison for interviewing a gay man on his show.

Globally over the past decade there has been sometimes staggering progress towards legal and social acceptance of those who don’t conform to heterosexuality. So why is Africa different?

Brian Pellot, a Cape Town-based LGBTIQ rights expert, suggests “political scapegoating is often a factor, with sexual and gender minorities being unjustifiably blamed for all sorts of social and economic problems”.

With both evangelical Christianity and conservative Islam having staged a remarkable resurgence across Africa over the past two decades, narrow-minded religiosity is also to blame.

“Religion, nationalism and pseudoscience are often misused to justify discrimination against LGBTIQ people. Where things are improving, it’s often due to positive court rulings rather than significant shifts in public perception.”

In West Africa, he sees “surveys with more than 90% of respondents saying soc-iety should not accept homosexuality in their countries”. And he regularly spots fiercely homophobic and transphobic media coverage all over the continent.

“While I hope the trend is towards increased tolerance and legally enshrined rights, it seems to be more of a ‘one step forward, one step back’ situation, with advancements in some countries and setbacks in others,” he says. “Regional activists remain hopeful that the arc of the moral universe will bend towards justice.”

This article was first published in the Financial Mail‘s 21 February 2019 edition.