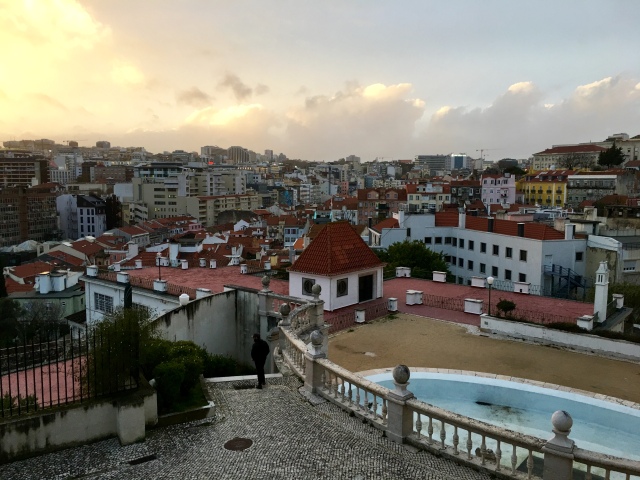 Yes. This is what I mean by saudade. My last night in Lisbon. An empty pool. Rooftops. And wistful AF clouds.

Saudade. It was on my last evening in Lisbon that I felt it like the tide that streams into the Tagus. The word the Oxford Dictionary defines (with woeful inadequacy) as “a feeling of longing, melancholy or nostalgia”. I was standing by an empty pool in the Jardim Torel, under a pink, cloud-speckled sky, alone save for one or two passersby. Lisbon’s hills rippled out beyond the balustrades: a jumble of tiles, concrete, stone and glass – as close and elusive as the recent past. I spotted the Four Seasons The Ritz H0tel in the distance – where my sojourn in the city began. When it opened in 1959, it was the city’s first grand hotel – built with the lavish, enthusiastic support of Portugal’s then-dictator, António de Oliveira Salazar. Almost 60 years later, it still has no equal.

There are many reasons to love this hotel. The impeccably gracious service. The snatches of piano-playing you hear at teatime. The elegant, spacious rooms overlooking Eduardo VII Park. The rooftop running track which has sweeping city vistas that shift with each stride. The dimly lit hush of the lap pool and spa in the basement. The gobsmackingly yummy waffles and buttermilk pancakes – my two favourites from the bountiful array of breakfast options you can enjoy either in the grand, high-ceilinged restaurant or the cosy, clubby Ritz Bar.

Best of all, though, is that the hotel is an extraordinarily rich trove of mid-century Portuguese art. Myths, symbolism, and everyday moments find bold, often colourful expression in tapestries, sculpture, paintings and friezes throughout the building. A handy art guide app for iPad and iPhone means you can wander the public areas and corridors discovering who created what. Although it’s hard to miss the three Centaurus-inspired works by Almada Negreiros which dominate the lounge, it’s also worth seeking out the appositely titled Four Seasons by Sarah Afonso on the mezzanine. And you absolutely must sneak into the ballroom (if it’s not being used) to admire the delicate, glowing hues of Arnaldo de Almeida’s Bambús.

Suitably inspired, I continued my arts exploring beyond the confines of the hotel. I went to the Calouste Gulbenkian Museum first. Its Founder’s Collection features staggering 6,000-odd pieces – ranging from ancient Greek and Egyptian antiquities to eighteenth-century French decorative arts. I skipped this, opting rather to immerse myself in the Modern Collection which is housed in a distinctive, sloping gallery that draws abundant natural light through its staggered glass windows. More than 1,200 works, arranged chronologically, make this arguably the most extensive collection of Portuguese modern art in the world. Thoughtful curation offers insights into the moments and movements that have shaped Portugal from the late 19th century to the present – and how its artists have responded to and interpreted these. Afterwards, I drifted through the Gulbenkian’s tranquil Japanese-style garden and then popped into Under the Cover, a nearby magazine shop, browsing its tight but excellently edited collection of mostly independent titles.

I then headed to Belem in the west of the city. Here soars the Monument to the Discoveries: a vainglorious, slabbish stone celebration of colonial misadventures, erected in 1960 even as Portugal’s grip on its empire was inevitably weakening. A short walk away was the real purpose of my visit: the Museu Coleção Berardo, which offers an exquisitely rich crash course in the major movements of modern and contemporary art. From Dadaism and Abstract Expressionism to British Pop Art and beyond – it’s all here. Afterwards, I fortified myself with two pastel de nata from the bustling Pastéis de Belém which has been making them since 1837 using a recipe from the nearby Jerónimos Monastery where the iconic Portuguese custard tart was reputedly invented.

Then I visited MAAT – the Museum of Art, Architecture and Technology. Comprised of a refurbished former power station and a new, fabulously sleek, free-standing gallery, the MAAT houses an ever-changing mix of exhibitions, mostly featuring contemporary artists. Up next was the LX Factory– a self-consciously hip and slightly underwhelming precinct of restaurants, design stores and studios. Then I headed back in time at the Museu Nacional de Arte Antiga. If you like ornate gold- and silverware and very old art, you’ll love it. The constipated expressions captured on medieval canvases weren’t really my cup of tea, though I was totally transfixed by the trippy Triptych of the Temptation of St. Anthony byDutch painter Hieronymus Bosch. On its three luridly shimmering panels were more melodrama than all the seasons of Game of Thrones combined. 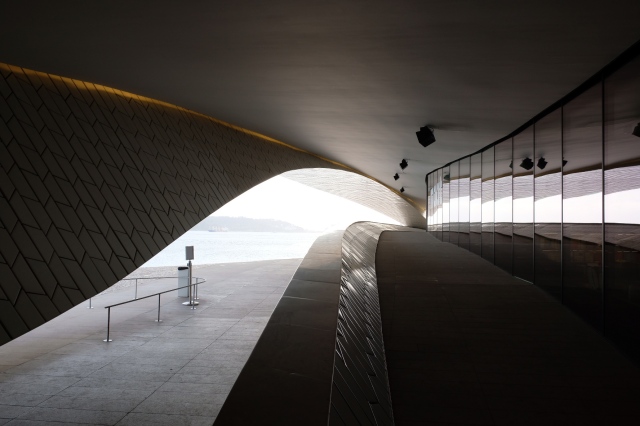 Onwards, eastwards and into the future: to Chiado, a smart shopping neighbourhood that’s also home to MNAC, the National Museum of Contemporary Art. Formerly a monastery, its building has been dexterously reinvented as a warren of exhibition spaces varying in scale. Temporary shows offer curated glimpses of the museum’s extensive collection. When I visited, I was captivated by the Gender in Art exhibition, in which sexuality and identity were poignantly explored; the hauntingly homoerotic images by young painter João Gabriel were particularly wonderful.

After three wonderful nights at the Four Seasons, I moved over to equally lovely, but very different, digs: The Lisboans, a set of self-catering apartments. If I hadn’t wanted to move to Lisbon before I arrived here, I certainly did by the time I’d crossed the threshold. I had entered my dream apartment: a smattering of antiques and art set against white walls; tall French windows framing views of the street; sleek mid-century inspired furniture, including a marble-topped dining table. I didn’t want to leave – but I had to; I had a lunch reservation downstairs at The Lisboans’ restaurant, Prado. 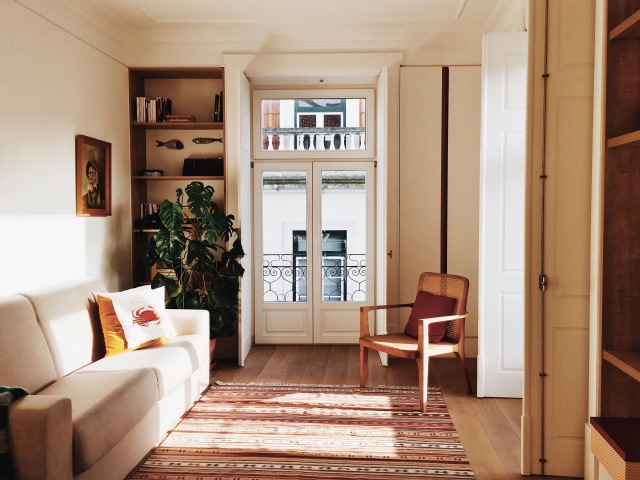 Your very own Lisbon apartment courtesy of The Lisboans. So homely, and yet so quintessentially Portuguse. How do they get it so perfect? You’re not going to want leave.

Chef António Galapito and his team serve up the perfect blend between rustic authenticity and knowing sophistication. Using only the very best seasonal Portuguese ingredients, the dishes are smallish and beautifully presented. I feasted on salty, creamy cockles to start with; seared and smoky pork intercostals for mains. For dessert: mushroom ice-cream — earthy, rounded, creamy with a sweet shock of caramel.

In March the Prado Mercearia, a farm-to-grocer concept, opened in the same building. As with the restaurant, the focus is on organic and natural Portuguese fare such as acorn-fed smoked ham, locally roasted coffee beans and biodynamic wine. 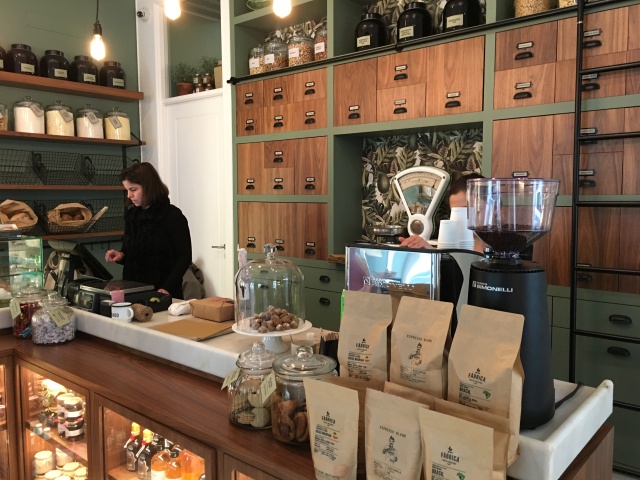 The Prado Mercearia. Hmmm, so much yum!

The Lisboans is poised between the grand Baixa and quaint Alfama neighbourhoods – an ideal base to explore both on foot. I wandered through the golden rain-slicked alleyways of the latter where mournful serenades leaked out of the open doors of Fado restaurants. I enteredTagus bar, listening to a Bossa Nova jam session followed by a Cape Verdean singer strumming his guitar – two reminders of the strong cultural links Portugal maintains with its former colonies. I drank peppermint tea at the comfy, lounge-like Pois Café and drank a solitary Super Bock beer at a humble, tiled taberna. The Lisboans left orange juice and fresh bread outside my door in the morning – a wonderful touch. Fortunately, though, I still had enough space for a heavenly almond croissant a few doors away at Fábrica bakery. 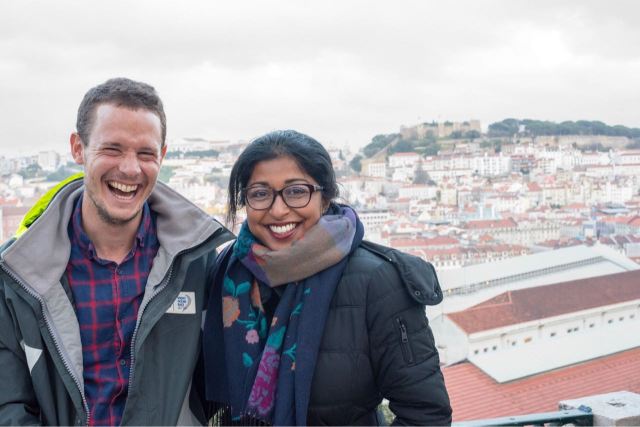 This is me and the inimitable, super knowledgeable, all-round-wonderful Ishay Govender-Ypma who has written extensively about the city.

In Baixa, I fell in love with Burel’s sturdy but timelessly stylish woollen satchels, blankets and cushions (woven and manufactured in a mountainous village). For more Made in Portugal delights, A Vida Portuguesa offered everything from sardines and ceramics to stationery and candles. Near Rossio station, I found glove and hat shops that have been plying their trade for decades. I stopped at A Ginghina – a hole-in-the-wall serving cherry liqueur – swotting off offers of cocaine and hashish from a scraggly-looking punter as I sipped the pleasantly warming and surprisingly tart drink.

I spent little time in Bairro Alto – which is densely packed with bars and clubs – opting rather to stroll through the little parks and wide, elegant avenues of the neighbouring Príncipe Real. Inside the Pavilhão Chinês(Chinese Pavilion) I drank Port served by waiters in old-fashioned uniforms, surrounded by trinkets, toys and dolls stacked to the ceilings.

Dinner was at Restaurante Palácio. This beerhall-cum-dining room is the real deal: garish lighting, harried service, vast local families and steaming trays stacked with some of the city’s most delicious seafood. Ours featured percebes (a kind of eerie-looking barnacle), clams, garlic-soaked prawns and sweet and fleshy spider crab – all washed down with vinho verde (a slightly fizzy green wine). The night ended at another palace: the astonishingly opulent Palácio Chiado. I nursed an exceptionally made negroni in its gin bar (one of several quaffing and dining spaces in the building), admiring the frescoes, sculptures and soaring, vaulted ceiling above. I raised my glass. Lisbon, you’re hard to beat.

An edited version of this article appeared under the heading “Nostalgia for past art glory suffuses even Lisbon’s Ritz” in the 20 October 2018 edition of Business Day.

I was a guest of the Ritz Four Seasons and The Lisboans.

← Learning to let go: discovering the zen of surfing
Walking the Camino: a reinvigorating retreat-in-motion →