Walking the Portuguese Camino, from Porto to Santiago de Compostela, is an opportunity for reflection and rejuvenation

The twisty, narrow streets of Porto’s old town were a distant memory by now, so were the tall apartment blocks, factories and highways of its outlying suburbs. Finally, I was in the country. I’d spotted a few other pilgrims on the way – no more than a handful, though. There would be more and more the closer I got to Santiago de Compostela, my final destination – but that was still more than 220km away.

I stopped to read a sign. It explained there was the old way – a more dangerous route sans pavements and clogged with traffic – or you could follow a prettier, quieter detour, which looped past the monastery I planned on overnighting at.

A Czech woman joined me in front of the sign. She asked where I was from and giggled when I told her I was South African. “I always wonder why people as far away as that come all this way for the Camino,” she said. “Don’t you have walks in your country?”

“Oh, we do,” I replied. “But the Camino de Santiago [the Way of Saint James] is pretty special, don’t you think?”

It began in the Middle Ages. Catholics – from France, Portugal, Germany and England even – walking to Santiago de Compostela, in the north-western corner of Spain. These pilgrims believed that buried in the city’s majestic cathedral were the remains of one of Jesus’s 12 apostles, Saint James (Santiago, in Portuguese and Spanish). They were walking as an act of devotion, a celebration of faith, a way of connecting to their religion – Christianity. Although many of today’s pilgrims share these aims, there are many (me included) who do not.

Why was I walking? What did I hope to get out of it? I had decided to follow the advice of travel writer Pico Iyer, who once suggested: “Become a pilgrim with no agenda — no hope of finding anything — and who knows what may come to you?”

I was open to being moved, to the Camino changing me, without caring too much how that might happen, or being insistent that it should. Certainly, I loved the idea of following in the footsteps of many thousands before me. In the age of the smartphone, of apps and the internet, we are so fixated on what has just happened or is about to. Walking the Way was a means of feeling humbled and small, but also connected to something vast – treading on a grander narrative that extends back thousands of years. Literally, in fact: much of the route is on roads first built by the Romans.

And, in the age of the jet and the train and the car, the Camino was an opportunity to slow down – to live life at the pace of my footsteps. The slower you move, the more you notice; the present becomes bigger and richer and more satisfying. Although I carried a camera, I deliberately left my phone behind in Porto. While others sought distraction in music played through their earphones, I had just myself, the landscape and occasional fellow pilgrims to entertain me. I noticed patterns – the different doors (from grand to sleek to falling-apart), the different dogs yapping on walls (beagles, Alsatians, mutts). I inhaled wafts of cut grass, the mist rising off rivers, the manure slapped onto newly sown fields. I heard the birds tweeting, hidden highways’ traffic, the chimes of village churches marking each hour.

The first few days were the hardest. My body was still slowly acclimatising to carrying the weight of my backpack and to walking long distances. Towards the end of the second day I felt particularly tired and uncomfortable – or so I thought. When I stopped thinking about what I was feeling and simply started feeling – honing in to observe, minutely, the sensations in my buttocks, my thighs, the discomfort seemed to melt away. A slight heaviness remained, but it felt as if I could carry on for miles. As my Camino progressed, I would return to this, letting go of words, stories, ideas – and just feeling, just walking, just being.

The drone-like chants of Mass in Vilarinho, the hot water spring in Caldas de Reis, the classical-music playing bridge in Ponte de Lima, the soaring vaulted ceiling of Padrón’s cathedral: there were riches to be had by being immersed in tradition, language and culture not my own. Wonderful things can happen when you turn away from what you know. Disorienting, uncomfortable and sometimes intoxicating, the unfamiliar has the power to prise you open, to soften you, to spark new ways of seeing, thinking and doing.

Of course, it depends how open you are to this. I treated the Camino as a retreat-in-motion. Time and space not to find myself but to simply be with myself, allowing both the “good” and the “bad” to float to the surface. Sometimes that was easy and comfortable: there were plenty of moments infused with joy and gratitude and contentment. There were also moments when I was bored or lonely; then there were times when I wept, aching and overwhelmed. The Camino held all of those feelings. Like both the rain and the sunshine, I knew they would pass. I let them be. For someone who tends to hold onto things a tad too tightly – whether they be hopes, expectations, fears or anxieties – this was a small triumph, a surrendering that left me soothed and invigorated.

While the times walking alone were opportunities for reflection – where insights about where I belong and in what direction I’m headed could emerge – the times walking alongside fellow pilgrims were opportunities for connection and conversation. Although they ranged in age, careers, purpose and citizenship, they were generally an open-hearted, friendly and generous lot. We ate pasta and drank cheap (and surprisingly good) Spanish supermarket wine. We talked about faith, philosophy, psychology; about the Royal Wedding and bananas’ energy-giving succour. We showered together and shared foot-scented, snore-filled dorms. With routes, distances and paces varying, I sometimes saw the same pilgrims frequently on the road or at the hostel every evening; others I only glimpsed once or twice before they disappeared from view.

A pilgrimage, I realised, is not about escaping your daily life. It’s about stepping back from it so that you can return with renewed purpose, clarity and vigour. By the time I reached Santiago I was hungry to get back to South Africa, excited to resume my life there. Sometimes walking in the opposite direction is the surest way to finding home. 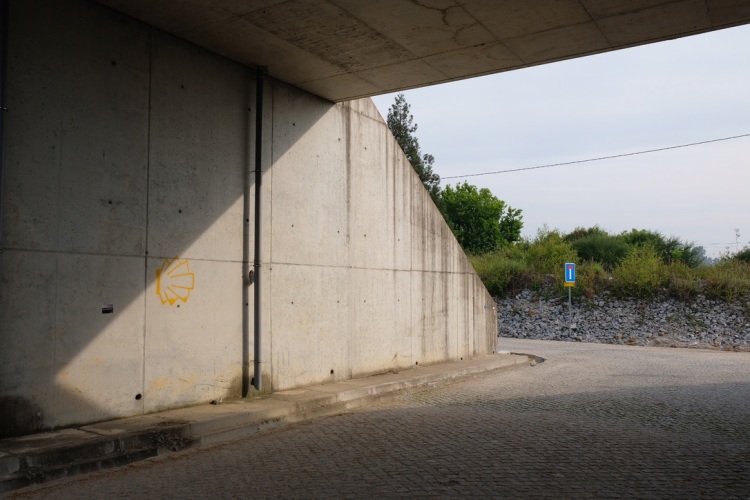 Although there are various apps and guides available, I kept it simple, relying solely on the Portuguese Camino brochure available from the Tourist Information Office next to Porto’s Cathedral. Featuring maps and distances, it also lists the official pilgrim albergues (hostels) en route. These cost EUR 5/per bunk bed in Portugal and EUR6/night in Spain. Bring a sleeping bag. Beds are filled on a first-come-first-served basis; if there’s no room left the staff will help you find an alternative. There are also plenty of privately-run hostels along the way (many well sign-posted as you walk); most cost around EUR12/night. You can also stay in more luxurious – and more expensive options – including guest houses and hotels.

I walked the Portuguese Camino’s central way; there is also a coastal one. The routes are generally well-marked with yellow arrows. (If you stop seeing arrows, you most likely took a wrong turn so retrace your steps till you find one.) I covered 242km in nine days of walking; the longest stint was 34km, the shortest 18km. Depending on your available time and energy levels, you can break your walk into smaller segments. Attempting this with at least a moderate level of fitness is recommended: before you leave, train for three months or more with hour-long walks in your neighbourhood. Wear comfortable, worn-in hiking or trail running shoes, thick socks and pack durable plasters to stave off the (sadly almost inevitable) blisters for as long as possible.

One of the great joys of the Portuguese Camino was enjoying pastries and coffee for breakfast and a beer and bifana (pork sandwich) for lunch at one of the plentiful all-day pastelerias (snack bars) in Portugal. Eating options are a little sparser outside of main towns once you’ve crossed the border, so pack a snack in case you don’t find one when the hunger pangs bite. Most establishments only accept cash (though you’ll find ATMs even in small towns). For dinner, many bars and restaurants offer pilgrim menus – a three-course for around EUR10 or less. For the extremely budget-conscious, cheese, cured meats and fresh bread from a supermarket makes for a deliciously cost-effective alternative.

The Camino routes that begin in France, heading from east to west, are better known and thus busier. Here are three other reasons you might be tempted to do the Portuguese Camino, from south to north instead:

This article first appeared in the August 2018 edition of Sawubona.