On the campaign trail with Mmusi Maimane

In the run-up to South Africa’s 2014 general elections, I joined Mmusi Maimane — then the Democratic Alliance’s Gauteng premier candidate — for a morning on the campaign trail. Five years later it still offers clues about the head of the official opposition.

A few minutes later, a Lexus soars up the street, a gate opens, revealing a double storey house and spacious garden. The car enters: the DA’s premier candidate for Gauteng has returned from the gym. He joins us, smartly suited, ten minutes later. We climb in. Today the bus is headed to the townships of Boipatong and Sharpeville so that Maimane can talk to residents – two more dots on the map of his pre-election Believe tour of the province. He’s already clocked up more than 27,000 km in less than three months, attending three to five events on most days.

“It is incredibly draining,” he tells me – this is why exercising is so important (and why later he will, half-jokingly, badger his campaign aide for a “proper” day off). Gym, normally three times a week, and boxing at least once a week “keeps me at least mentally in the game”. “I find boxing is good for politics because you are often in some metaphorical ring with someone who’s taking you on.” Whether in boxing or in politics, his coach has taught him that it’s not just about throwing punches – it’s also about knowing how to take them too.

And Maimane has suffered his fair share of knocks. Accusations have abounded – that the 33-year-old is too young and inexperienced, that he’s merely a dark shade of window-dressing for a “white party”, that his meteoric rise from being an obscure DA party member in 2009 to one of its brightest stars today has been suspiciously swift.

But Maimane says he’s not anxious about his critics. “It’s been a very good five-year journey. I celebrate that. But, in an equal opportunity society, if you want to see that in the world, you must practice that yourself.” In 2011, when he stood for the Joburg mayoral candidacy he was up against “an experienced DA councillor” in front of a selection panel of 30 members. And while his position as DA national spokesperson is an appointed position (approved by the party’s federal executive), his appointment as the DA’s deputy federal chair was decided by 4000 delegates at the party’s congress in 2012.

For the post of premier candidate, he was up against party veteran Jack Bloom. Again he won the selection panel’s vote.

“I think the criticism in SA really comes out of the ANC’s propaganda machine” which, he says, labels successful black South African in other parties as “tokens” and “coconuts” and claims that blacks marching for the DA are “being herded and bought by whites”.

We discuss the speech he gave a few days before at the Apartheid Museum where he spoke of building a new political identity, one that isn’t embedded in race. Politicians have two choices, he says. “Either you mobilise communally or you create an integrated society of individuals.”

Both the Freedom Charter and apartheid doctrine relied on racial mobilisation. Apartheid entrenched “you versus us”. While 1994 was an emancipation of “us” – the black majority – he says a new transition is required, one where individual rights trump “communal and racial mobilisation” and where self-identity is defined by personal choice.

“We are in the phase of correcting the historical oppression of black South Africans as a collective. But the destination of that must be the liberation of individuals,” he says.

“We must stimulate and incentivise affirmative action,” he says, instead of penalising business. Affirmative action which “fits within the broad BEE scorecard as we’ve proposed” should mean that “you can score more points if you do it well” and achieve a diverse workplace. He feels the same applies to his party. “I’m not interested in building a DA for blacks or a DA for whites – it’s a DA for all.” 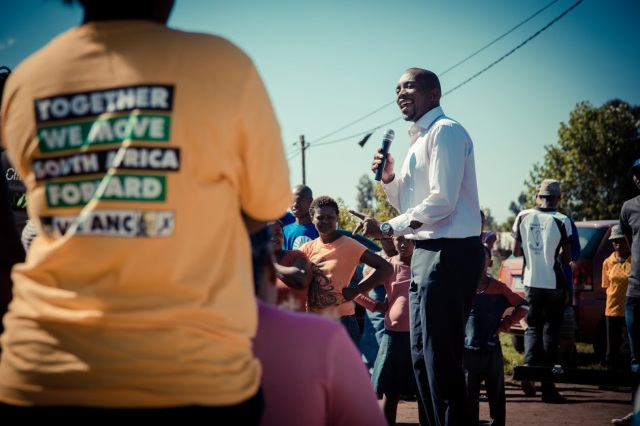 Maimane speaks to a community during the 2014 election campaign. Photograph by Jurgen Marx.

Maimane grew up in Dobsonville, Soweto. His primary school’s principal was a “very inspirational” Catholic nun, Sister Christina, an ANC activist who shared a cell with Gauteng’s current premier, Nomvula Mokonyane. She “asked me constantly to question what was happening”, remembers Maiamane. It wasn’t unusual to arrive at school to discover it cancelled because the police had broken into her office to try to find documents.

“Even if you weren’t interested in politics you were very clear that politics was interested in you.” SA was in the grip of a State of Emergency. “My first encounters with white South Africans were these army boys who would be in the townships with stun guns literally traumatising kids,” he says.

Chris Hani’s murder in 1993 “is seared in my mind forever”. “I thought something’s fundamentally wrong. He wrote in his journal that 40 years of apartheid would take 40 years of undoing. “I knew almost subconsciously that I needed to do something about it,” he says.

As a member of a community church in Muldersdrift and increasingly active in various faith-based organisations, he taught part-time at schools in the area while busy with his undergraduate degree in psychology. He remembers handing out food parcels for child-headed households. “I realised that I can do as many food parcels as like, the reality is that this community here, particularly in Zandspruit – need government intervention.”

Having finished a master’s in theology, he began another one in public administration at the University of Witwatersrand.

“I wasn’t always certain I would be a public figure – I was always certain I would be an administrator,” he says. His work as a business consultant had made him realise that if he could help businesses make more money, why couldn’t he use his expertise in government, helping the department of basic education to deliver textbooks on time to the schools he was volunteering at, for example.

A lecture by Professor Mohammed Jahed – a former economic adviser to President Thabo Mbeki – inspired him to complete his master’s with a focus on macroeconomics.

His introduction to the DA was through Ian Ollis (the party’s transport shadow minister); they worked together on a project in Rosebank trying to get homeless people off the streets. The pair became good friends and Ollis convinced him to join the DA.

Maimane remembers meeting party leader Helen Zille for the first time, a few months before the 2011 local government elections when he was planning to stand as a councillor. He thought that it was “incredible” that the leader of the opposition wanted to meet with him; he wryly remembers “exactly what she was wearing as though it was our first date”. She had something greater in mind than councillor though – suggesting he put his name forward as a contender for mayoral candidate. He recalls reading a quote by Churchill at the time – “To every man there comes an opportunity when they’re figuratively tapped on the shoulder and asked to do something great, something fitted to their talents; what a great tragedy it would be for that moment to find him unprepared for the task which would be his finest hour.” He says he felt “a figurative tapping”. Maimane didn’t become mayor, but his campaign saw the DA’s support in Joburg jump from 25.9% to nearly 35%.

Maimane has never served in government. I ask him what he believes gives him the ability to lead Africa’ economic powerhouse?

He believes his public administration master’s “allows me to rethink the world”. “There’s a tension between your experience and your inexperience. I think both those things are good. Five years later I feel I’ve learnt a lot.” Being the leader of the DA caucus in the City of Johannesburg has given him a practical appreciation of “democratic and legislative processes and the separation of powers… the inexperience part is good, in that I celebrate the fact that I’m not wanting to go into the Gauteng legislature and do more of the same. Inexperience forces you to innovate.”

Maimane believes his youthfulness is as an advantage.

“You must have your value set based in the new SA we want to see. I view racial integration in a uniquely different space mainly because I was a leader whose values were shaped in the new South African environment” instead of the dark days of apartheid. On a recent visit to the Voortrekker Monument, he reflected that “when you have been oppressed, you run the risk of being able to oppress others … the Afrikaner story teaches us that”.

Maimane’s business credentials also hold him in good stead, he believes. “I want to make sure that the state is run as a professional, fit-for-purpose environment, that we hire the best.”

He wants to create an advisory council of business leaders that can assist in developing a model for economic growth driven by the private sector instead of by piecemeal government “projects” that only employee a 100 people at a time.

With two young daughters “government services impact you a lot” – whether through safety, health or education. He wants his legacy to be ensuring that these services improve. Part of the reason he’s in politics, he says, “is to make sure my kids can go to the public school down the road from my house”.

Maimane has recently been complimentary of President Mbeki’s controversial leadership. I ask him about this.

He tells me that life was better for more South Africans under President Mbeki’s tenure. With decent growth and a budget surplus, “economically I thought we were heading in the right direction”, he says.

“I’ve never given blanket compliments to President Mbeki. I don’t think that everything he did was right.” He cites the president’s Aids denialism and the implementation of cadre deployment as examples.

However, Maimane believes that at least economic policy had clarity and certainty under Mbeki’s watch – unlike today’s “gridlock”, where the New Growth Path and the Industrial Policy Action Plan conflict with a “stuck” National Development Plan.

Zuma has built “an administration that protects him” at a time when there is rising frustration at persistent poverty and unemployment.

“People accept that you can’t correct poverty overnight but they refuse to accept that you can build Nkandla overnight,” he says. He believes that delivery protests – which have, in recent months, engulfed swathes of his province – show that “people’s patience is tested when leadership fails”.

“You’ve got to be able to get on the ground and talk to people. They’ve got to trust you, they’ve got to believe you are their premier, they are the ones who are in charge.”

If he becomes premier, he has committed to visiting a different community every week, spending an hour or two with them to hear their concerns.

We have arrived in Boipatong. A local DA activist is yelling to residents through a megaphone in rapid-fire Sesotho, calling on them to meet the man he describes as the “South African Obama”. Within in 15 minutes, a small crowd has coalesced around the bus. Maimane talks to them about Zuma and Nkandla, about his vision for a clean, corruption-free province. And jobs!

The crowd looks on with quiet approval, responding with a lusty “Awethu” as he yells “Amandla” upon concluding his speech.

After he’s fielded some questions, we head to a nearby shopping mall for breakfast. Maimane is more relaxed. The articulate charm is still there, but now it is his turn to ask the questions – over scrambled eggs and bacon we discuss identity, sexuality, religion.

I’m intrigued about the role his faith has played in shaping his political outlook. Earlier, he told me that his Christianity has led to “strong conversations about how do we interface with the poor”. He says his faith stems more from uncertainty than certainty.

This article first appeared in Wanted magazine’s April 2014 edition under the headline “The Contender”.