Oranjezicht City Farm is an urban oasis bringing a community together and making Capetonians question their relationship with food. 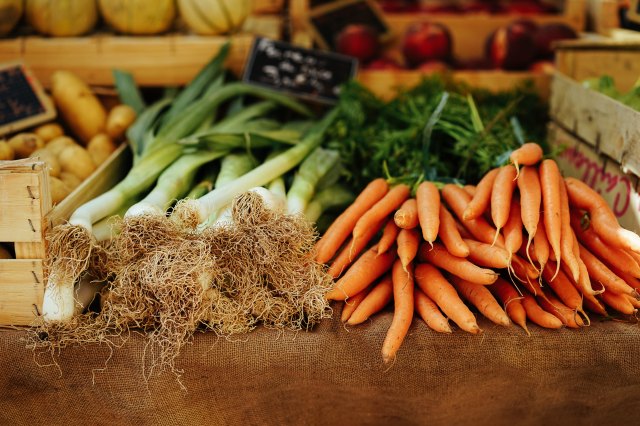 “From a bowling green to a bowl full of greens” – the slogan emblazoned on a banner at the entrance to the Oranjezicht City Farm (OZCF) aptly sums up the transformation of neglected municipal-owned land into a thriving vegetable garden in the shadow of Table Mountain.

I am sitting on a bench overlooking the farm with Sheryl Ozinsky, its co-founder. Immaculate beds of vegetables are spread out neatly before us; water gurgles along leiwater channels. It’s hard to believe that all this has been established in just a few months.

The farm has its origins in a harrowing experience. About 15 years ago, shortly after moving into a house nearby, Ozinsky and her partner were held up by gun-toting burglars. “I felt very alone. I felt scared,” she says, recalling the aftermath of the incident. There were no resources available to tell her how she could make her home safer, or how widespread the incidence of crime in the area was. And so she decided to establish OH Watch, a neighbourhood association covering Oranjezicht and Higgovale in 2008. Today it has about 2000 members; its volunteers roam the streets with walky-talkies and licence plate recognition cameras scan the streets. “We still have crime but we don’t have contact crime like that incident that I experienced,” she says.

To improve community safety, Ozinsky believed it was important that the neighbourhood watch took into account the neighbourhood’s public spaces and how they were being used. The derelict Homestead Park, “was full of drug dealers and bad types sleeping here and the walls were literally falling over”, she says. “We started hosting events in the park, and those were successful, and helping the city to fence the park and clear out all the garbage and then we, of course, noticed this bowling green” right alongside the park, once been the site of a “magnificent” Cape Dutch homestead. The council had demolished this and built the bowling green in 1957. Waning interest in bowls led the green falling into disuse, with the clubhouse becoming home to a preschool.

At the time, “there was no sense of the hearth of the community, the heart of the community,” Ozinsky says. She started talking to a bunch of people, including Kurt Ackerman, the farmer Mario Graziani, landscape architect Tanya de Villiers and graphic designer Mark Stead about how they could begin a farm on the land. The first step was approaching the City of Cape Town. They were told that their idea was possible, but that a permit from Heritage Western Cape (the custodians of Western Cape heritage sites) was required as the land was a national monument. To obtain the permit, they needed to commission an archaeological sensitivity report, develop a full plan for what the garden would look like, a planting schedule, a survey of the site, a business plan, and launch a public participation process for residents to provide input.

“We got it all done in a very short space of time,” says Ozinsky. On the first of November 2012, “we literally arrived on the site after knowing nothing” but ready to work. “I think it’s morally reprehensible to preach to poor people that they should grow their food when we have not tried to do it ourselves. It’s hard. The learning curve is steep.”

Making the land fertile – and doing so organically – has been difficult. At the beginning, the land “was poisoned. There wasn’t an earthworm or a ladybird on this site,” she says. They planted comfrey, a compost catalyst and use nutrient-rich worm tea generated by the farm’s wormery. The community has also been encouraged to use Bokashi buckets which contain bacteria that break down kitchen waste into compost.

There are many other challenges – geese and squirrels have to be kept from munching veggies. A companion planting strategy is used for pest control – for example, borage alongside cabbage and tomato plants scares of bugs fond of these veggies.

There are over 100 varieties of fruit and vegetables planted, many hard to find in the supermarket – including broad and Borlotti beans and black chickpeas. It has taken time to figure out which plants grow better.  “We’ve got to work with what this place likes,” Ozinsky says. “The soil will tell you what it wants to grow. Rocket grows like a weed here. Our salad leaves are growing like a bomb here as well.”

The challenges of an urban farm aren’t purely agricultural, though. Although Richard Griffin, managing director the Madame Zingara entertainment and restaurant empire, provided a R100,000 donation to help cover the project’s start-up costs, Ozinsky says, “We don’t have patrons like Michelangelo. We have to make ends meet ourselves.”  The farm is exploring different ways to earn more revenue, such as consulting, to supplement its donations and sales of its veggies.

People and personalities have to be managed – some volunteers are comfortable with working collaboratively, others less so. The farm has a meeting every Monday in which anyone can participate. Volunteers also have to be kept motivated and inspired. Some come during the week, working alongside the farm’s two full-time employees, Japie and Cecil, who were recruited through Straatwerk NGO, and joined the farm knowing nothing about gardening. Other volunteers come on Saturday mornings – when there can be up to 100 people helping out: planting, hoeing, watering. To keep people coming back Ozinsky says it’s best to play to their strengths and not their weaknesses. “Don’t make somebody do something that they’re not comfortable with doing and they’re not able to do.”

Originally a marine biologist, Ozinsky has worked in public relations, fundraising and marketing roles at iconic Cape Town institutions such as the Two Oceans Aquarium, Iziko Museums, and the Robben Island Museum; she was also head of Cape Town Tourism for six years. Now she works 12-hour days, running a sustainability consultancy in between her work on the farm.

“This project for me is everything that I’ve ever done in my life in one project: finance, marketing, retail, collaboration, relationship building, networking, job creation, understanding resource management,” she says. But what makes her invest so much of her time, energies (and, as a proud donor, her money) into a veggie patch?

“This is not about carrots,” she says. “This is about how can carrots be the catalyst for growing the community. How can carrots bring people out of their sheltered environments behind high walls because they fear, into a communal space where they have something in common? People come here and they say they so enjoy it because for the first time they see their neighbours. That’s really the power of this project” – whether people pitch up to volunteer, attend workshops or simply to hang out on Saturday mornings when you can harvest your own veg, buy compost, seedlings and bokashi, and get tips about growing your own food.

The OZCF’s produce is also sold on Saturdays and Sundays at the OZCF Market adjoining the V&A Waterfront, where you can also buy freshly made breakfasts and lunches, artisanal products, pasture-reared meats and other wonderful goodies. There’s also a strong emphasis on “alternative” food – such as wheat-free, vegan, and diabetic-friendly products.

But the OZCF is not merely helping to bring the community together.  “I think it’s a catalyst to begin to question your own lifestyle. I think there’s a yearning to get back to a simple lifestyle where you can spend time with your family. We see it here – the kids love this leiwater channel, their feet in the water, the mother with a pram having a cup of coffee, sitting on a hay bale, listening to a bit of lovely music, being with friends, eating food that really is good. I would love people to just question a little bit about how they’re living today, what they’re eating especially.”

“I’m not an alarmist but I do believe that food is the biggest issue of our time and it hasn’t had its time in the media,” she says. Commercial farming’s environmental burden, as well as the impact of genetically modified organisms, pesticides, hormones and antibiotics in food production, is often left unconsidered by consumers, many of whom are indifferent or ignorant of the implications of these for both themselves and the environment.

Ozinsky believes it is essential that food is grown as close as possible to those who eat it. The further away, the more expensive it becomes because of high transport costs. The distance from field to plate also entrenches a sense of detachment between ourselves and our food.

“If we don’t produce food locally then a lawyer – and this is a true story – will turn around to me and say they never knew that beans grew in a pod,” Ozinsky says. People who buy asparagus at the market are “gobsmacked” — they’ve never seen asparagus spears grow out of the ground. “That is so absolutely thrilling to us and it makes all the hard work worthwhile,” she says.

Ozinsky believes the farm can inspire people to have a closer relationship with the people who grow their food. Farmers at the market – both those who grow veggies on the farm, and others from around the Western Cape, “will never sell you something that is bad for you. They can explain to you how it’s grown and what you can do with it” when you are preparing a meal.

Ozinsky hopes the OZCF will encourage people to embrace an alternative to purely relying on big retailers and commercial farmers for their food – and that people can grow their own. The farm is also a great way of “getting little kids to love vegetables because they taste good, and buying plants from us, and seedlings, so they can also grow” them.

The best way to learn how to grow your own food is to spend time helping at the farm. Volunteering “benefits a person; you can become richer just by learning and growing”, she says. The OZCF is collecting heirloom seeds so that people can “take seeds from us and grow stuff that reseeds and that’s good for them.”

“Food should be abundant and cheap – it shouldn’t cost the earth like we pay for it at the moment,” says Ozinsky. “There is no reason why we can’t grow enough food” in the city. “The City of Cape Town has disused land that’s costing taxpayers a fortune to keep secure, to mow. The OZCF is not costing the city any money. And we’re providing jobs and we’re providing community building and it’s safer – and so it benefits the estate agents, the police, everybody – so why not replicate this in 40 or 50 communities in the city?”

Ozinsky is keen for the OZCF to help other communities, letting them “use the lessons that we’ve learnt here”. With a growing presence on Facebook (it has over 4,000 likes), the farm has also been receiving floods of emails from all over the world. They’ve given talks to people interested in creating similar projects in various parts of Cape Town and as well as further afield.

This is an updated version of an article which first appeared in Wanted magazine’s February 2014 edition.

← Michael Stevenson on an extraordinary chapter in South African art
Lessons from a Nobel Laureate​: the late Nadine Gordimer on South Africa’s turmoil →