Scary and sublime: Adventures in the silence of the Tankwa and Richtersveld 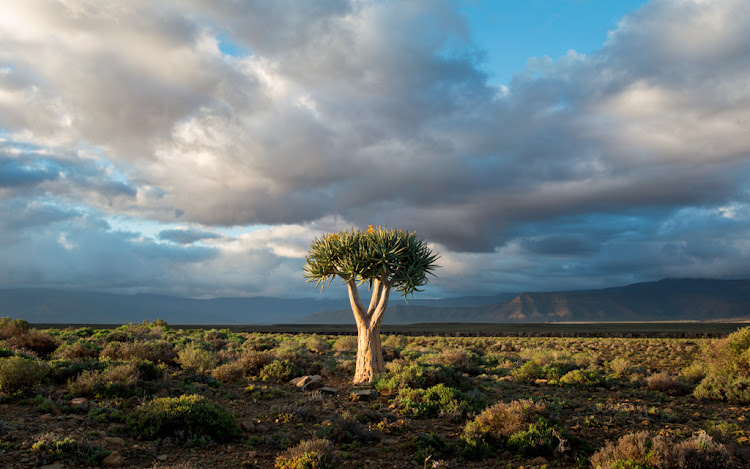 The last time I visited the Tankwa Karoo National Park I was on assignment for Wanted magazine, researching a feature on the wonders of a digital detox — about the benefits of disappearing for a few days into South Africa’s remote, arid hinterland sans internet.

Four years later, I’m back and panicking — we’ve just got a flat tyre and now I’m really wishing we had at least one bar of signal. A flat is no biggie in the city, but out here there’s no sign of anyone. The only buildings we’ve seen for the past half-hour are a couple of abandoned farmhouses. We’re surrounded by breeze-whipped silence and desolate plains; the lengthening shadows cast by distant mountains offer meagre consolation.

We gingerly start to change the tyre. I’m furious with the driver — my partner — having warned him that Tankwa roads are notorious for shredding tyres (given my own track record, though, I don’t have a right to be angry.) Fortunately, a guardian angel pulls up in a cloud of dust 10 minutes later: a park official, who is happy to help.

Tyre replaced with the doughnut spare, we drive slowly to the park office, collect our key, and drive another 20 minutes along empty gravel roads to the Elandsberg Wilderness Camp. After unpacking, I go on a jog to get rid of my nervous energy.

The sky is wider and bluer than the ocean. Beyond the plains, the craggy Roggeveld escarpment rises to the horizon. When I get back, I slip into the bracing plunge pool and use a knife to open a bottle of wine — there’s no bottle opener. Solar-powered electricity has been installed since my last visit: the romantic Dietz lanterns and candles have been replaced by incredibly ugly light fixtures. Well done, SANParks. Still, with its wide windows, wooden sills and earthen walls, the house retains much of its rustic charm.

The next day, I spend ages back at the park office on its landline calling the rental car company. With promises of a replacement vehicle, we return to our cottage feeling elated, like we can finally relax, which we do, the old-fashioned way — with board games, paperbacks and some of the Tulbagh valley’s finest tipples. The new vehicle is with us before we know it, arriving in the late afternoon. Key in hand, I’m feeling sheepish at how much this relatively minor travel wrinkle was able to unsettle me.

Perhaps, though this is the other side of silence. When things are going well I quickly adjust to being unplugged — I love it, typically becoming absorbed by my surroundings, happy and contented. But, as I’m fast learning, when things go wrong while my cellular umbilical chord is unplugged, it’s a different story: I feel antsy, fearful and helpless.

We drive onwards the next day in our shiny new Tiguan. I insist on being behind the wheel, driving carefully, compulsively checking the tyre-pressure monitor, wincing at every juddering corrugation, every clink and rattle as we traverse the rough road. In spite of my nerves, I’m still able to appreciate the staggering beauty of my surroundings. It’s mostly sand, stone and rock; plains riven with dongas and flat-topped koppies with gently tapering sides. No trees and scarcely any plants means it’s impossible to get a sense of scale — are we driving past hills or mountains? Their barren majesty is impressive regardless.

A few hours later, we reach the Tankwa River Lodge. Watched by horses, dogs and sheep, we pull up outside the old farmhouse that has been transformed by its owner into a stylish villa for holidaying families and friends. Adjoining a quiver tree-studded garden, its rambling sequence of whitewashed rooms (some of which date back 300 years, apparently) can fit up to 12 guests. Chock-full of sepia photographs, antiques and memorabilia, it’s a storied, homely place.

There’s a daybed on the shady stoep, a dining table out back, and comfy couches inside — so you can eat, drink and lounge to your heart’s content no matter the weather. 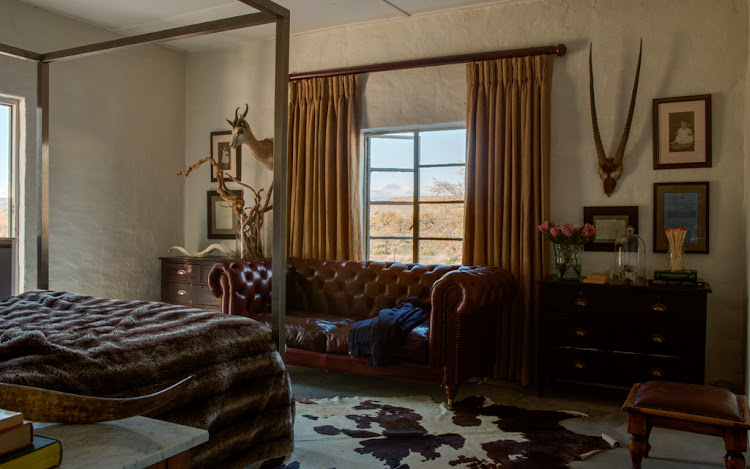 Inside one of five bedrooms at Tankwa River Lodge. Picture by David Ross/Perfect Hideaways

In spite of being off-grid, there are some concessions to the modern world: an ample, gas-fuelled fridge, a generator-powered washing machine and Wi-Fi. There’s still no cell signal for miles, though, so any farm rambles you embark on will be mercifully notification-free.

That evening, I jog between thorny trees along the river bank. All that remains from the flash flood a fortnight ago are sporadic pools of muddy water. The farm manager arrives to light the storm lanterns and the big logs in the fire pit. After I’ve finished braaiing, I look up at that wide sky pulsing with stars. I’m moved by this reminder of my smallness and connectedness to something immeasurably bigger than myself.

In the morning, we hop aboard a rickety, roofless Land Rover, and the manager takes us exploring. We see a smattering of gemsbok, springbok and wildebeest. In spite of the landscape’s harshness, the surrounding koppies have an embracing softness to them. Perhaps that’s because of their colours: gentle shades of brown, blue and purple.

Occasionally, plane contrails dissect the sky. If it wasn’t for these chalky reminders, I’d be convinced modern life didn’t exist. It feels exhilarating to have escaped.

After leaving the Tankwa (and a minor detour to canoe on the Orange River), we drive to another barren, remote wonderland: the|Ai-|Ais/Richtersveld Transfrontier Park. We arrive after a day’s driving, our eyes still dazzled by the sand dunes and the glimmering Atlantic viewed from the road between the melancholy settlements of Port Nolloth and Alexander Bay.

All that water seems surreal and forgotten now that we’re at the gate. It’s 4pm and the park official is worried we won’t make it to the Gannakouriep Wilderness Camp before dusk (driving at night here is verboten). We’re told to drive to the office, another 20km away, at Sendelingsdrift. The lady there is also doubtful we’ll make it in time, but gives us her blessing to attempt it anyway.

We spend ages carefully climbing a track strewn with angular chunks of rock. Now it is the earth that is like an ocean: great, rippling waves of rock plunging down to sandy valleys. There are more hairpin ascents and descents. As the hours progress, the moon rises and the light fades. We arrive at Gannakouriep as the last blush of day is fading to night. We’re directed to our little stone-walled cottage. There’s just one other car — the first one we’ve seen in hours.

I’m too tired to braai, so we fry up sausage and beans instead. This time there’s a bottle opener but no spatula. The uncovered, searingly bright bulbs give the kitchen a striking resemblance to a Guantanamo Bay interrogation room. Afterwards, I sit outside, gazing up at the cosmic mist above. Again, the bright-skied remoteness — and the paradoxical connectedness — surges in like a hypnotic, joyful rush. I could spend all night staring, marvelling at the renewed clarity about what matters and what doesn’t.

Minutes after leaving the next morning, the car develops a rattle that keeps us company over the coming hour. We’re on our way to the park’s second wilderness camp, Tatasberg. The road rises steeply; I push the accelerator pedal to the floor. No luck: the wheels spin uselessly. Several times we reverse down the narrow track, and speed up again. Each time the car gets stuck in shingle. Our T-shirts are sweat-soaked, our hair soft from the churned-up dust. Defeated, we’ve got no choice but to turn around.

We decide to return to Sendelingsdrift. There are some silver linings — there’ll be a pool to cool off in and, more importantly, cell service in case anything goes wrong.

It takes us hours to traverse the mean gravel back to the main road. The landscape is beautiful, but I’m too busy worrying about the car’s ominous rattle to appreciate it.

I play a podcast to distract us. Finally, we limp past a disused diamond mine and visit the park office, pleading for a room at the inn. There’s just one chalet left — but we’re warned that the TV doesn’t work and there’s an issue with its lock. We don’t care. Seeing the slow, meandering Orange River half-shielded by trees is surreal — a miraculous mirage, surely.

The pool’s tantalising turquoise lies beyond a gate, where a message has been affixed: Out of Order.

I was a guest of the Tankwa River Lodge, which can be booked through Perfect Hideaways. SANParks accommodation can be booked at sanparks.org.

This piece was first published in Business Day’s 15 May edition, under the heading “Unplug and connect with nature at Tankwa River Lodge.”

The arid exquisiteness of the Richtersveld.